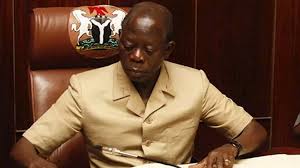 In spite of a favourable order of a federal high court sitting in kano vacating an interlocutory order restraining
the All Progressive Congress National chairman (APC), Adams Oshiomhole from holding his exalted seat as the chairman, it
was unclear as to whether the verdict of the court still subsist as heavily armed security man was seen restraining movement within the secretariat and
had to seal the party secretariat

As early as 7pm, Urban Express-News Correspondent
observed deployments of heavily armed security personnel, it is unknown what
their mission could be, but one of the party members who  spoke on
condition of anonymity said the development may be a mechanism used to avoid bloody  confrontation between anti and Pro-Oshiomhole groups in the event any of the interested parties resume
work

The security personnel politely stopped
both party secretariat staffers and curious journalists from gaining access to
the premises throughout the day.

It was still unclear, yesterday night if Oshiomhole would get the nod of the
Police authority to access the party secretariat.

A party stalwart who preferred to give
information on the condition of anonymity told our correspondent that Oshiomhole,
alongside some members of the National Working Committee (NWC), met with the
Inspector-General of Police (IGP), Mohammed Adamu, on the need to facilitate
his entry into the secretariat in accordance with the Kano court order, which
was in sharp contrast with an order of an Abuja High Court presided by Justice
Danlami Senchi, which upheld his suspension.

The development came as a crack
team of the Department of State Service (DSS) stormed the precinct of the
secretariat around 4pm when news filtered in that Oshiomhole was on his way to
there.

The heavily armed guards, who rode in
power bikes positioned themselves at the strategic part of the Blantyre
Street, where the secretariat is located.

The Development happened barely 30
minutes after unidentified aides to Oshiomhole, driving in a black tinted
Toyota Land Cruiser Jeep was barred from gaining access to the secretariat.

Scores of other security operatives and
persons in support and opposed to the embattled party chairman stood by,
observing the situation on the ground. Meanwhile, governors elected of the party’s
platform, under the aegis of Progressive Governors Forum (PGF), threw their
weight behind Oshiomhole’s suspension.

PGF’s Director-General, Mr Salihu
Lukman, described the Abuja High Court injunction against Oshiomhole as “a big
opportunity” to reposition the party ahead of the 2023 general elections.

The Forum, while acknowledging the
existence of the conflicting court order called for the appointment of an
acting chairman, pending the determination of the issue relating to the legality of the suspension of Oshiomhole in court.

Absolving President Muhammadu Buhari of
blame in the crises rocking the party, the Forum called on the NEC to convene
to resolve pending issues relating to the affairs of the party.

It claimed that members of the
Oshiomhole-led NWC have constituted themselves into an unaccountable assembly
with a thuggish temperament, which seeks to browbeat every other member,
especially aspiring candidates, into submission.

It noted: “The reality is that our
party is faced with a big problem, whereby none of our organs is meeting, as
provided by the constitution. In fact, we are even not sure who our members
are. There is, therefore, the urgent need to resume the process of party
building with confirmation of our members, as well as recruiting new members.

“This has to be followed with processes
of leadership reformation through wards, local governments and states
congresses to the national convention. How can we get all these started? First,
pending the settlement of all the cases around Oshiomhole’s membership, we need
to invoke provisions of Article 17 (vi), which provides that in the event of a
vacancy, ‘the relevant Party organ shall appoint another person to act in his
place, pending ratification by the National Convention or Congress.’

“This is where the organising,
consultation and negotiating capacity of our leaders will be tested.
Combinations of the majority of the remaining members of the NWC, in consultation
with the President, Governors, other party leaders who are leading members of
the national caucus, can resolve all these issues and convene the NEC to
appoint an acting national chairman.

“With the appointment of an acting
national chairman, the next would be to seek to invoke provisions of Article 25
A (i) of the APC constitution, which stipulates that the ‘National Convention of
the Party shall be held once in Two (2) years at a date, venue and time to be
recommended by the NWC and approved by the NEC, subject to the giving of
statutory notice to Independent National Electoral Commission (INEC) and at
least fourteen (14) days notice given to members eligible to attend.’

“Already, this is the second year since
the last convention in 2018, where the Oshiomhole-led NWC was elected. What
this means is that with or without our current challenges, we are actually due
for a national convention.