APC TO PATIENCE JONATHAN ‘’YOU ARE NOT ABOVE THE LAW 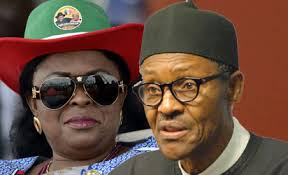 The Acting National Publicity
Secretary of the All Progressives Congress, Timi Frank, has dismissed recent
protests by some groups in the Niger Delta in support of the wife of former
President Goodluck Jonathan, Patience.

He said it was disheartening that
any group in the region could hold a protest in favour of Mrs. Jonathan at the
Port Harcourt zonal office of the Economic and Financial Crimes Commission,
over the freezing of her account containing about $31.4m.

This was contained in a statement
by Frank in Abuja, on Sunday.

Frank described threats by the
groups as empty and baseless.

He said, “My candid advice to Mrs.
Patience Jonathan is to apologise to Nigerians for the current economic
hardship which Mr. Jonathan’s regime could have easily averted instead of
sponsoring shameless protests against the government. Anyway, Nigerians are still
waiting for the apology.”

The statement warned youths to
desist from such shameless act of defending politicians for a pot of soup,
adding that the current APC administration was fighting corruption so as to
secure future.

He explained that it took the
intervention of the current administration to inaugurate a water project in
Otuoke, Bayelsa State where Jonathan was born.

“The show of shame called protest
at the Port Harcourt office of the EFCC to demand the unfreezing of Mrs.
Jonathan’s dollar accounts was uncalled for. And there is nothing wrong if the
former first lady explains the source of the $31.4m to anti-corruption
agencies.

“The country is presently going
through recession as a result of mismanagement of the economy left behind by
Patience Jonathan’s husband led administration which the APC is working hard to
correct as soon as possible.

“It should be made clear that there
is nothing wrong for the EFCC to invite Mrs. Patience Jonathan for questioning
if the organisation suspects a foul play in the accumulation of such big amount
of money.

“Again, the era of  ‘I’m above the law’ is over. This is a change
government of accountability where the rule of law is paramount.