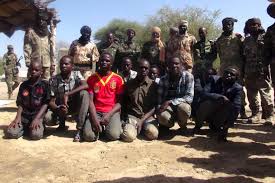 Maiduguri inhabitants had yet again
encountered another tragic incident that struck on Thursday night as Boko Haram
unleashed eight suicide bombers on the troubled town.

Apart from the suicide bombers, the
terrorist group attempted to invade the town with a small group of fighters
that attempted driving in on motorcycles.

Eyewitnesses said many of the
terrorists and civilians lost their lives in the attack by heavily armed Boko
Haram fighters at about 11:20pm on Thursday as they attempted to storm
Maiduguri through its border with Mafa.

They said some of the terrorists
tried to gain access into the town after infiltrating a newly constructed
Customs House where IDPs from Mafa are camped.

It was learnt that they were
repelled by troops and members of the youth vigilante group, after a long drawn
battle.

The district head of Anadua in Mafa
Local Government Area, Zanna Lawan told journalists that scores of civilians,
including all the Boko Haram fighters that carried out the attack were killed
in the encounter.

He said: “Boko Haram fighters tried
to storm into Maiduguri but were defeated by our gallant troops. They tried to
storm into Yerwa, Maiduguri metropolis, through the newly constructed Customs
House where IDPs from Ajiri and Anadua in Mafa Local government area are
accommodated.

“All the dreaded Boko Haram boys
were killed by our gallant soldiers, including many suicide bombers that
accompanied them.”

Lawan, who spoke to journalist’s yesterday
morning, said: “However, many civilians lost their lives as many also got
serious injuries. As I am talking to you, security agencies and ambulances can
be seen conveying those affected from Muna- customs camp to hospital.

He said: “The resulting explosions
razed over 13 pick-up trucks loaded with goods along Mafa-Maiduguri road
awaiting departure to Gamboru Ngala yesterday (Thursday). Police have been
deployed to return safety and normalcy there.”

“An eye witness account told
journalist also that the driver attempted to overrun the security post where
the security personnel were stationed, but few of the personnel sustained minor
injuries, while the remaining bombers detonated their IED in some of the
communities’’.

“Some of the suicide bombers found
their way to a place where people gathered with their trucks loaded with goods
for onward movement to Mafa, Dikwa and Ngala local government areas.

“Over 14 loaded trucks were burnt
by the suicide bombers, though no casualty was recorded. The seven corpses of
the suicide bombers were evacuated to the State Specialist Hospital by NEMA and
Borno SEMA team.”