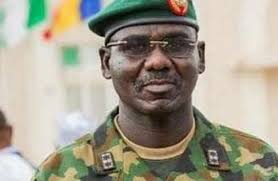 A Special Army Court Martial has
demoted a senior officer, Patrick Falola, from the rank of Major General to
Brigadier-General, for admitting students for clinical training without
permission from higher authorities.

Falola, who is the Director, 68
Military Reference Hospital, Yaba, Lagos State, was arraigned on a two-count
charge before a court martial presided over by James Gbum, an Air Vice Marshal.

President of the Court Martial,
Gbum, said Falola’s conduct amounted to fraudulent use of the armed forces’
property.

He acquitted Falola on the charge
of conduct prejudicial to the service, but convicted him on fraudulent
misapplication of the hospital’s property.

“This court is compelled to award a
higher punishment under sections 103 and 66 of the Armed Forces Act Cap A 20
laws of the Federation 2004.

“The court has taken into
consideration the service record of the convicted senior officer, the touching
plea in mitigation by the defence counsel as well as the demeanor of the
convicted officer. “But we have also taken into consideration the senior
officer’s seniority, rank, experience and the regimental tradition of the armed
forces.

“This court has discharged and
acquitted the convicted officer on the first charge, on the second offence, the
sentence is reduction in rank to Brigadier General,” he said.

Reacting to the judgment, the
defence counsel, Enokela Onyilo-Uloko, a retired Wing Cdr., said the conviction
had no legal backing and was an attempt to tarnish the clean record of his
client.

Onyilo -Uloko said this was because
there was no law stating that senior officers must take permission from higher
authorities before allowing such training.

He said his client only did what
his predecessors also did, which was no crime, adding that his client would
appeal.