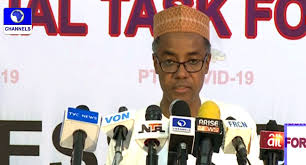 Even though
speculations are ripe that president Mohammadu Buhari may extend the lockdown
in the already restricted states of Ogun, Lagos and federal capital territory (FCT)
, the National Coordinator  for the
Presidential Task Force On COVID-19, Dr Sani Aliyu cautioned states governments
against contemplation of lifting the lockdown order.

Aliyu
made this remark at Friday’s edition of presidential briefing on COVID-19 and
that which was monitored by our correspondent on channel’s television’s live
broadcast yesterday.

The National Coordinator for the PTF on
COVID-19, Dr Sani Aliyu, cautioned state governments against relaxing the
lockdown order.

Buhari
had, on March 29, ordered the lockdown for an initial period of 14 days to
tackle the spread of the Coronavirus pandemic.

As of
that day, Nigeria had 111 COVID-19 cases with one death, according to the
Nigeria Centre for Disease Control. The cases were recorded in 11 states and
the FCT.

While
58 patients had been discharged, seven had died as of Friday night.

The new
cases also brought the number of states affected to 18, excluding the FCT.

Speaking
at the media briefing, Dr Aliyu  said Akwa
Ibom, Rivers and Ondo are among states that took the decision to relax their
restrictions for Christians to commemorate the Easter celebrations.

Aliyu
said, “We noted that some states had started lifting their bans or relaxing
their containment protocols. This is really not the right time to do so, partly
because we still have an ongoing pandemic, which is global.

“It is
also not the right time to do so, because we could end up having a reoccurrence
of infections.

Aliyu explained that there was also a “very
strong need” for state governments to work in harmony and align with the
Federal Government to deal with the pandemic.

He
further said, “I would like to ask state governments, working through the state
task force teams or the state ministries of health, to consider setting up
accreditation teams that would accredit particularly private facilities, and
public facilities.

“This
is for the simple reason that it is really important that our front-line health
care staff know how to use personal protective equipment and how to protect
themselves from this infection.

“We are
very keen to expand the availability of intensive care facilities beyond just
the public sector.”

“It is also not the right time to do so,
because we could end up having a reoccurrence of infections.

“At
this point, I am appealing to our local community leaders, religious and
traditional leaders, as well as the state authorities, to continue to support
and encourage the public to maintain those protective measures.”

On the
issue of Detained Caverton pilot, the Minister of Aviation, Hadi Sirika, said
the pilots of Caverton Helicopters who were arrested and detained by the Rivers
State Government would soon be released.

Sirika
made this disclosure while responding to questions

He
said, “The pilots were carrying out national assignment because the speech by
the SGF and the presidential address exempted oil and gas from the lockdown or
shutdown in national interest.

“And
these Caverton Helicopters’ pilots were flying into the military base on
national assignment.

“Of
course, I may not be learned but I am lettered and I understand, in this case,
there is no conflict between the federal and state laws but I will not argue
that on this platform. It is unnecessary.

“So, on
whether the governor of Rivers State (Nyesom Wike) ought to know if the
exempted Caverton flight would be landing in a military base in Port Harcourt
belonging to the Nigerian Air Force, he did not need to know.

“
regarding the pilots, the pilots will soon be released, rescued and there will
not be any conviction hanging on their necks.”

Sirika
further said, “Arising from the constitutional provision and the powers of Mr
President, the seriousness of this task force, the danger of COVID-19, the way
we operate civil aviation and military aviation, that’s why I said the air
force officer acted ignorantly to have called the governor when the chopper
landed on his property.

“Also,
the federal police who made the arrest within the premises of the military
acted ignorantly as well. And I said they exhibited incompetence, as this
matter should not be over-flogged.”The Federal Government is there for the 200
million people of Nigeria, regardless of whether you are from Rivers or Cross
River, Kano or Kaduna.”