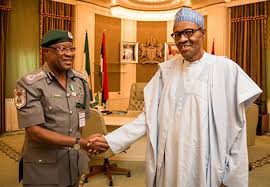 The commission’s spokesperson, Mr
Wilson Uwujaren, gave the confirmation via SMS to the News Agency of Nigeria
(NAN) in Abuja.

Dikko, who headed the NCS between
August 2009 and August 2015, was reportedly arrested by the EFCC in June over
alleged diversion of N40 billion from the agency’s coffers.

He was said to have been released
due to his poor health and was expected to return more money.

Uwujaren confirmed the seizure of a
property belonging to the former customs boss in the Jabi district of Abuja,
saying it was under investigation.

Media reports had identified the
property as a mansion worth N2 billion and located at 1 Audu Ogbe Street, Jabi,
Abuja.