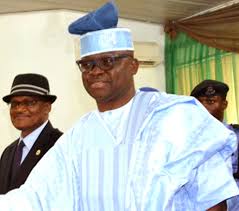 Governor Ayodele Fayose yesterday
commended the heroic contributions of the founding fathers of Ekiti State for
their vision which led to the creation of the state.

Yesterday marked the 20th
anniversary of the state. Ekiti State was created on October 1, 1996 alongside
Bayelsa, Gombe, Nasarawa, Ebonyi and Zamfara States by the regime of the late
military Head of State, General Sanni Abacha.

Commenting on the contributions of
the past military and civilian administrations from Col. Mohammed Usman,

Commodore Atanda Yusuf, Dr Kayode
Fayemi, Niyi Adebayo and Segun Oni, among others in building the state to its
enviable height, Fayose stated that each of the leaders did their best for the
state.

Addressing stakeholders at what he
described as a low key celebration of 20th anniversary at the Oluyemi Kayode
stadium after the Independence Day walk, which kicked off from Mathew Street in
Ado Ekiti, Fayose commended the military dictator and Ekiti founding fathers
for actualizing the dream of the creation of the state.

“Let me commend Gen. Abacha for
creating the state and I also thank our founding fathers  for their vision.

Though, I didn’t participate in the
struggle, but I am a beneficiary and many children and governors yet unborn
will also benefit .

“Politics aside, let me commend all
the military and duly elected governors of the past for their contributions,
because they have contributed their own quota within the available resources to
lay a foundation,  because without the
foundation there would be nothing to build upon.

“Ekiti has scored many firsts
within the two years I came on board. Ekiti recorded impressive rating in
transparency in budget provision. It came first in 2016 NECO and these came at
the most auspicious time when Ekiti is 20. Our desire now is to buckle down and
work harder for more service delivery for the good of you and I.

“The present economic recession in
our country is not pleasurable; it is not interesting at all. It is sad news to
hear that a dollar is now being exchanged for N500.

“Whatever our political, religious
and other interests are, we must put our eyes on the ball called Ekiti  for our tomorrow to be better than this”, he
said.

Fayose promised that the flyover
project, Ikere Ekiti dualisation project, the new Oja Oba Market and other
projects in all the 16 local government areas, including the proposed High
Court complex  and new governor’s office
will be completed before his departure in 2018.

“I want to tell you that I won’t
abandon any project. All the projects I have started will be completed before
my departure”, Fayose assured.