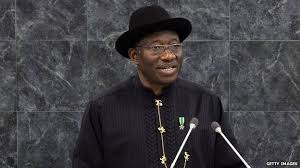 The umbrella body of Ijaw youths,
the Ijaw Youth Council Worldwide, has asked the Economic and Financial Crimes
Commission to stop the persecution of former President Good luck Jonathan and
his family members.

The IYC advised the anti-graft
agency to carry out its duties through due process instead of engaging in media
charade and blackmail.

The President of IYC, Mr. Udengs
Eradiri, who spoke at a news conference in Yenagoa, Bayelsa State on Thursday,
expressed sadness at the manner the EFCC was denigrating the former first
family.

He wondered at how the EFCC had yet
to learn from its poor handling of the alleged graft case involving former
Niger Delta militant leader, Government Ekpemupolo, alias Tompolo.

Eradiru said instead of the EFCC to
focus on facts and do their job via due process, they quickly went to the media
and that incident had led the country to its current economic mess, noting that
the country had lost about N2trn.

He called on the anti-graft agency
to stop blackmailing Dame Patience Jonathan, saying that the call on her to
explain how she made her money was a witch-hunt.

He said, “First Ladies in Nigeria
do not do any work. You know what it is; a woman naturally attracts a lot of
gifts from men, let alone the First Lady who has the power to recommend people
for something.

“They receive a lot of ‘Thank you’
and gratification because in most cases they recommend people. Those they
recommended usually come back and say thank you ma. Even when they do not
recommend, people can go and say thank you with a million dollars.

“The scenario did not start with
Dame Patience Jonathan. We know how influential the former First Lady before
her was and other first ladies – how powerful, how rich, how wealthy they were
as a result of gratification because they were Presidents’ wives. That is how
they amass their wealth.

“If you say Patience Jonathan
should go and show how she made her money, then, you must first start with all
the other former First Ladies before her, otherwise it is a witch-hunt.”