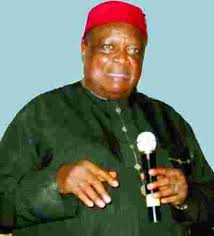 An elder statesman, Chief Emmanuel
Iwuanyanwu, has advised President Muhammadu Buhari to seek economic advice from
a former Minister of Finance, Ngozi Okonjo-Iweala, in order to rescue the
country from recession.

Iwuanyanwu said with the present
economic problems, no foreign investor would invest in the country.

The politician urged Nigerians to
generate fresh ideas rather than attribute blames and give excuses.

He spoke in Owerri, the Imo State
capital, when members of the African Youth Parliament from 50 African
countries, led by the Nigerian representative, Ibrahim Mohammed, visited him.

Iwuanyanwu said, “When Nigeria was
in this type of mess some years ago, former President Olusegun Obasanjo called
on Okonjo Iweala to help. Ex-President Goodluck Jonathan also used her to
revive the country’s economy. Nigeria, at this present stage of economic
hardship and downturn, should also call on Okonjo-Iweala and others for help.
We are in a recession now, if care is not taken, we shall go into depression
soonest.”

The elder statesman also frowned on
the way sensitive ministries were merged into one, adding that there was no way
such supervising  minister would perform
a miracle in his or her responsibilities.

“In fact, he (Buhari) should
separate Works, Housing and Transport ministries and appoint a minister each
for the ministries,” he said.

He advised the members of the
African Youth Parliament to pass the message of peace to the youth.

“No good thing comes from
destroying good things. I implore you to pass this message across, especially
to the youth of the Niger Delta areas,” he added.