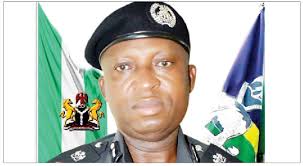 The
Lagos State Police Command said it has arrested two police personnel accused of
extorting money in a viral video where a lady had accused a Divisional
Transport officer (DTO) and a woman sergeant at Agbowa police Division of
extorting money from her.

The
lady in a viral video on social media had accused the Divisional Transport
officer (DTO) and a police sergeant of allegedly extorting money from her
against her wish.

“I left
my house with the intention to collect about fifty thousand Naira from any Automated
Teller Machine (ATM) around to buy foodstuffs within Agbowa, but found out that
they are not in operation, only for me to sight some policemen one patrol who
eventually directed me to an alternative source where I was able to collect ten
thousand Naira”.

“On
getting back to my car, I was told I’m under arrest, what was my offence, she
asked? This, according to her, did not come with any response, only for her to
be taken to Agbowa Police state, and after waiting for him exhaustibly, she eventually
meet with the DTO who told her to meet a woman sergeant that allegedly  extorted the sum  of ten thousand Naira (10,000,00) from her
before the car was released.

But in response
to the development, the Lagos state police command in a statement said it has
arrested two of its personnel identified on the matter.

The police public relation officer, Dsp Bala
Elkana in a statement said Assistant superintendent of Police identified as
Adebayo Ojo and Sergeant Mojisola Adeleke was arrested for allegedly extorting
a woman in Agbowa area of the state.

The Spokesman
said on Thursday that the victim had in a trending video on the social media,
accused the cops of extorting money from her after impounding her vehicle.

He
stated that the cops had been arrested after the footage was analyzed, but
urged the victim to report at the command headquarters in Ikeja as the state
Commissioner of Police, Hakeem Odumosu, had ordered an investigation into the
case.

Elkana
stated, “The attention of the Lagos State Police Command has been drawn to a
video on the social media in which a lady alleged that her vehicle was
impounded by the Divisional Traffic Officer for the Agbowa Division and a
female sergeant. She equally accused the officers of extorting money from her.
After analysing the video, the officers mentioned were identified by our
operatives and was arrested.

“They are Assistant Superintendent of Police,
Adebayo Ojo, and Sergeant Mojisola Adeleke.

“The
state Commissioner of Police, Hakeem Odumosu, has ordered an in-depth
investigation into the case. While appreciating the courage of the complainant
and other well-meaning citizens, who forwarded the video to our social media
page, the command urges the complainant to take a step further by reporting to
the command headquarters in Ikeja to enable the command to conclude the investigation.”