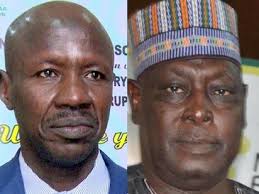 The Attorney General of the
Federation and Minister of Justice, Mr. Abubakar Malami, on Wednesday, said he
had submitted the report on the probe of the Acting Chairman of the Economic
and Financial Crimes Commission, Mr. Ibrahim Magu, and the Secretary to the
Government of the Federation, Mr. Babachir Lawal.

Malami, who disclosed this to journalist monitored by our correspondent  in Abuja, said he submitted the report
to President Muhammadu Buhari on Friday last week, adding that the President
would have the final say on the document.

The President had, on December 18,
2016, directed Malami to probe all top government officials accused of
corruption.

The Senior Special Assistant to the
President on Media and Publicity, Garba Shehu, who announced the presidential
directive, had said any of the government officials found guilty of the
allegations levelled against them would not escape prosecution.

Based on the directive, the AGF had
queried the SGF and the acting chairman of the EFCC over allegations levelled
against them by the Senate and the Department of State Services respectively.

Malami, when asked if he had
submitted his report on the investigations of Lawal and Magu, said, “Yes,
Friday last week.”

“It was submitted to the
President,” he stated.

In the communication with urban
express online on Wednesday, Mallami declined to comment on his recommendations
and the contents of the report.

“It is a presidential document and
the Presidency has the right to make statements over it and not the AGF,” he
added.

Malami’s statement was in response
to reports that he recommended that Magu should step aside while clearing Lawal
of the allegations levelled against him.