My wife’s duty is to look after me, Buhari submits again! 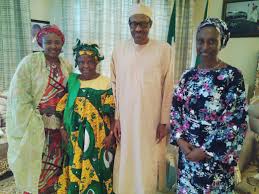 Despite the criticisms that have
trailed his comment that his wife, Aisha, belongs to the kitchen and in the
room and “the other room,” President Muhammadu Buhari says he stands by his
earlier commend

He insisted that his wife’s duty
was to take care of him; hence, she should stay away from politics.

Buhari said this in an interview he
granted Deutsche-Welle’s Phil Gayle shortly before he left Berlin, Germany on
Saturday.

The reporter had asked the
President to clarify what he meant by his earlier comment while reacting to an
interview his wife granted the Hausa Service of the BBC in which she alleged
that her husband’s government had been hijacked.

The following discussion ensued
between the President and the reporter:

Recently your wife criticised your
choices for top jobs, and you responded by saying “I don’t know which party my
wife belongs to, but she belongs to my kitchen and my living room.” What did
you mean by that, sir?

I am sure you have a house. … You
know where your kitchen is, you know where your living room is, and I believe
your wife looks after all of that, even if she is working.

That is your wife’s function?

Yes, to look after me.

And she should stay out of
politics?

Buhari’s insistence contradicted
the position of his Senior Special Assistant on Media and Publicity, Garba
Shehu, who said on Friday that the President was only joking with his remarks
on his wife while addressing a joint press conference with Angela Merkel of
Germany.

On the recent release of the 21
Chibok girls, Buhari said the Federal Government had always preferred to talk
to bona fide Boko Haram leaders about the release of the girls.

He said his position had always been
that government must have a credible person or persons that would intervene,
preferably the United Nations or international NGOs.

“I think that the Federal
Government of Nigeria team insisted on a better type of arrangement and we
secured 21 out of about 220 of the Chibok girls,” he said.

When asked if the government
released Boko Haram commanders in exchange for the released girls, Buhari said
he did not have the details of the deal yet.

He explained that the girls were
released shortly before he left Nigeria for Germany on Thursday, hence he had
not received full briefing on the deal since the issue should not be something
to be discussed on the telephone.

Buhari said he hoped to get the
full briefing on his return to Nigeria. Buhari returned to the country on
Saturday.

When asked if he knew what had
happened to the remaining girls, the President said his administration was
working hard to find out.

“That is what we are trying to find
(out) now. The more we get, the more information we get about the balance,
whether they are dead or alive … and where they are.

“The important thing about really
insisting on the go-betweens – especially NGOs, the United Nations – is the
credibility of persons that will be talking to the Federal Government,” he
said.

When asked for the purpose of his
three-day official visit to Germany, Buhari said his aim was to woo more
investors from the country.

He said, “We want a lot. We want
German investors. As you know, there are about 100 German companies in Nigeria,
and German investors have earned a lot of respect from Nigeria because of the
quality of the manufactured goods they produce, especially machinery. …
Nigerians work very hard to learn as much as possible, and attract German
investment in manufacturing, especially.”

Buhari promised to look at the
Gender Equality Act as part of the nation’s law.

When asked if he believed that
gender equality was a good thing, the President said, “It is a good thing to
the extent that it is accepted culturally throughout the country.”