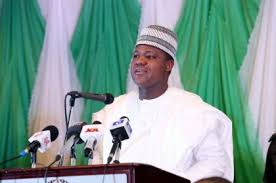 House of Representatives speaker, Mr. Yakubu
Dogara, said on Tuesday that continuing power failure in the country is
becoming alarming especially asking Nigerians to pay for what it never
consumes  after spending billions of  tax payers’ money  in the last 16 years, coming out with no
result , and that which continue to bring darkness to Nigerians is becoming
unbearable.

Dogara spoke in Abuja at the
opening of a stakeholders’ dialogue on the ‘Nigerian Power Challenge: A
Legislative Intervention’.

The session, which was facilitated
by a power supply stakeholder, Surging Gold Limited, had, in attendance, the
President of the Senate, Bukola Saraki; the Minister of Power, Works and
Housing, Mr. Babatunde Fashola; and some key investors.

Dogara noted that nothing had
changed in the sector other than the fact that it continued to consume money
but produced little positive results.

He observed that the privatization
of the sector had not fared better, a development Dogara said had put more
pressure on both the Federal Government and other stakeholders to think of
realistic steps to revamp electricity supply.

“Why is it that the more we spend
on the power sector, the more darkness we attract?

“Why are most of the companies
licensed by Nigerian Electricity Regulatory Commission not able to start their
projects?”

Saraki pointedly said epileptic
power supply in Nigeria was the “failure of governance.”

He stated, “Wherever we go in the
world, the failure is on all of us, whether we are in the private sector or those
of us in the public sector.”

The Senate President observed that
privatisation was meant to be a solution, lamenting that generation companies
and distribution companies were sold to persons who had no idea about how to
run the sector.

Saraki called on all stakeholders
to be sincere in finding sustainable solutions to the sector by thinking more
of the general interest of Nigerians than selfish interest.

“We must be prepared to put Nigeria
first and the government itself must be sincere with every decision that they
have to take,” he added.

Fashola told the session that he
could not agree less with Saraki and Dogara, but quickly added that there was no
going back on privatisation.

The minister argued that what was
needed to be done was to strengthen privatisation by putting the right
structures in place to encourage the investors.

For instance, he said Gencos were
battling huge liabilities, which had hindered their ability to pay for gas
supplies to generate power.

The minister also made references
to court cases slowing down developments in the power sector.

Speaking on the impact of vandalism
on the sector, the minister added “almost 3,000 megawatts of power” had been
“decommissioned” by vandalism.

On their part, the investors
pointed out that the way out was for the government and regulators to support
“cost-reflective tariff” and for consumers to pay the power already supplied.