Ondo Guber: The Afterthought that led to Jegede’s replacement as PDP candidate 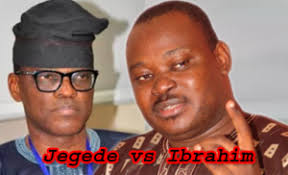 CHAIRMAN of the Peoples Democratic
Party (PDP) Caretaker Committee, Senator Ahmed Mohammed Makarfi has warned that
the party would resist any plan to impose a candidate on it in the forthcoming
Ondo State governorship election.

Makarfi, who spoke to newsmen in
Kaduna yesterday, said the crisis that emerged from the Independent National
Electoral Commission’s (INEC) approval of the candidature of Chief Jimoh
Ibrahim as the PDP candidate for the governorship election in Ondo State was a
clear indication that the Senator Ali Modu Sheriff-led faction had abandoned
the reconciliation moves in the party.

Meanwhile, some concerned
chieftains of the Peoples Democratic Party (PDP) have alleged that a northern
governor and some federal ministers were behind the replacement of Mr. Eyitayo
Jegede as the flag bearer of the party in the November 26, 2016, election.

Makarfi accused the Sheriff faction
of playing to an alleged plot by the ruling All Progressives Congress (APC) to
win the forthcoming election, saying that his faction would continue to deploy
legal and political means to ensure the victory of Jegede in the election.

Makarfi expressed optimism that the
opposition party would re-organise itself as a formidable force within the next
six months in order to salvage the nation from the hands of APC in 2019.

Makarfi said: “I want you to recall
that we gave INEC relevant notices as stipulated by law; they observed our
primaries and took our nomination. It was reported that the other side did primaries
at midnight in Ibadan.

“It was not covered by INEC or any
authority for that matter. So, if a court of law gives INEC some orders that
for whatever reason it felt compelled at that time to comply with, it is
unfortunate; no court of law, in the first instance, should give such an order.

“They are ignoring all the other
laws relating to regulations and how candidates should emerge. Be that as it
may, it has been our principle not to personalise issues because our judicial
system provides for appeal process and we have appealed. And we have absolute
confidence that the appellate court would be able, before the election date, to
determine the legitimate candidate of the PDP.

“We are still confident that Jegede
who was properly nominated by our party will stand for the election as the
candidate under the PDP flag for Ondo.”

The concerned chieftains of the
PDP, however, alleged that a northern governor and some top ranking ministers
played key roles in the intrigues that led to the recognition of Mr. Jimoh Ibrahim
as the PDP flag bearer in the election.

The chieftains alleged that the
northern governor, who allegedly has interest in the 2019 presidential
election, and the ministers, connived with the INEC to replace Jegede as the
PDP candidate in the polls.

One of the chieftains, who
anonymously spoke with Sunday Sun, alleged that at least five INEC lawyers gave
legal advice against the replacement of Jegede as the PDP flag bearer in the
state.

The source alleged that despite the
lawyers’ advice, the northern governor leveraged on his long-term relationship
with an INEC top official to ensure Jegede’s replacement.