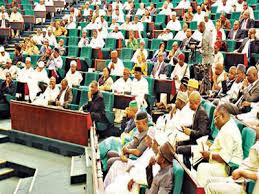 THE chairman, House of
Representatives Committee on Basic Education, Honourable Zakari Mohammed, has
faulted the decision of the Presidency to “hijack” the implementation of the
proposed recruitment of 500,000 teachers and school feeding programme.

He said the programmes, being
handled by the Office of the Vice President, Professor  Yemi Osinbajo, instead of the Federal
Ministry of Education that had all the agencies and capacity to conduct the
recruitment and execution of the school feeding programme was wrong.

He spoke while delivering his
goodwill message at the ongoing 61st National Council on Education (NCE) with a
theme: “Teacher Quality: A Tool for Sustainable Human Capital Development.”

This came on the revelation by the
United Nations Educational Scientific and Cultural Organisation (UNESCO) that
the Nigeria needed to allocate extra $1.8 billion every year, in order to
address the current teacher shortage in the country.

Honorable Mohammed observed that if
the two laudable projects initiated by the Federal Government would succeed and
not fail like other projects in the past, execution of the projects should be
moved to the Federal Ministry of Education.

He said: “We might not avoid the
mistakes of the past if those programmes, as laudable as they are, are not
handled by competent agencies of government.”

Minister of Education, Mallam Adamu
Adamu, however, said it was the responsibility of the Federal Ministry of
Education to ensure that those employed were well trained before they were
deployed, in order to make them effective in the classrooms.

He noted that in recognition of the
death of teachers in academic institutions from basic to tertiary level,
President Muhammadu Buhari initiated the policy for the recruitment, training
and deployment of 500,000 unemployed teachers as an emergency measure to
address the chronic shortage of teachers in public primary schools.

He said: “The decision to recruit
so many teachers by the Federal Government could not have come at a better time
when, according to UNESCO Institute of Statistics, the global demand for
teachers stood at 25.8 million to achieve Universal Primary Education by 2030.