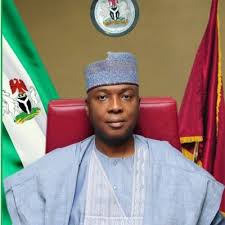 THE Senate, on Wednesday, rejected
three bills seeking to establish grazing reserves in different parts of the
country.

The bills, including one sponsored
by Senators Barnabas Gemade, Chukwuka Utazi and Rabiu Musa Kwakwanso, sought
the establishment of ranches and grazing reserves in different states of the
country.

But the Senate rejected the bills
when the Deputy Senate President, Ike Ekweremadu, raised a constitutional point
of order to knock them out.

Ekweremadu said the items being
introduced in the bills were neither accommodated in the exclusive not
concurrent legislative lists, adding that accommodating the bills would amount to
a waste of legislative time.

Senator Kwankwaso, on his part,
introduced a bill, entitled: “A Bill for an Act for the Establishment of
grazing Areas Management Agency and for other related matters, 2016 (SB 292).”

According to the bill by Kwakwanso,
an agency is to be created for the control management and demarcation of
national and local grazing areas, ranches, and stock routes, while protecting
public investment for economic and social benefits.

Senate Leader, Senator Ali Ndume,
had suggested that the three senators
harmonise the bills into a single entity but the lawmakers refused the
suggestion.

While opposing the suggestion,
however, Senator Gemade said the bills should be treated on their individual
merits.

But the Deputy Senate President
struck at that stage, when he raised a constitutional point of order to alert
the Senate that the issues contained in the bills were outside the
constitutional powers of the Senate.

“I will like to see somebody to
show me anywhere in the exclusive list or concurrent list that has given us
powers to legislate on this matter because they are not in existence,” he said.

The Senate leader, however, failed
in the bid to persuade the Senate to allow the bills pass the second reading,
so that the relevant Senate committees could decide their fate, as the senators
rejected the suggestion.

Senate President, Dr Bukola Saraki,
in his submission, said he had thought that the sponsors of the bills would
agree for harmonisation because of their similarity, adding that since the
agreement could not be reached, there was no need to keep the bills in custody.

“Before the point of order of
Deputy Senate President, I had already put a suggestion that these bills came
on the order paper based on the discussion I had with the two sponsors that
these bills be consolidated.