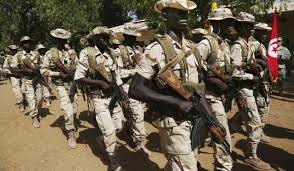 Nigeria’s military on Wednesday
said regional troops had recaptured a town on the shores of Lake Chad from Boko
Haram, but the Islamists claimed to have inflicted heavy casualties, the AFP
has reported.

The Acting Director, Army Public
Relations, Col. Sani Usman, who confirmed the clash, said that several of the
insurgents were killed in the ongoing operation.

According to him, the troops were
able to overpower the insurgents at Mallam Fatori during the operation, which
also involved the fighter jets of the Nigerian Air Force.

Usman said that the terrorists left
the area and had gathered around the nation’s border with Niger.

“However, the terrorists reinforced
around the border with Niger Republic.

“This was while the troops were
consolidating on this success. The troops killed several of the Boko Haram
terrorists in the resulting encounter and subsequently had to withdraw to a
vantage position.  The operation
continues.”

Usman said its troops and counterparts
from the Multinational Joint Task Force had “captured Mallam Fatori… after a
fierce battle of supremacy” backed by air support.

But “the terrorists reinforced
around (the) border with Niger… while the troops were consolidating on this
success,” he added in an emailed statement.

Mallam Fatori, in Borno State, was
liberated in March last year as part of a regional counter-offensive against
the Islamists, who had captured swathes of territory in north-eastern Nigeria
in 2014.

But fighters from Boko Haram, which
is affiliated to the Islamic State group and now calls itself Islamic State
West Africa Province, reoccupied the town after troops left.

The MNJTF is made up of soldiers
from Nigeria, Cameroon, Chad, Niger and Benin.

Northern Borno State, which is near
the border with Niger, is inaccessible because of insecurity with Boko Haram.

There have been an increasing
number of attacks in south-eastern Niger in recent weeks, an indication that
rebels have re-grouped and switched focus.

Boko Haram claimed its fighters,
which it dubbed “the cavalry of the caliphate”, attacked the regional force.