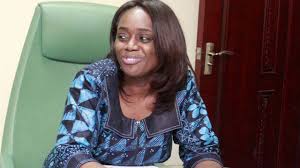 Nigeria Federal Government has commenced
the disposal of assets confiscated from past officials, Minister of Finance;
Kemi Adeosun has disclosed this, whilst saying the price of just a single part
of confiscated jewellery is enough to buy a house.

She also disclosed that the Federal
Government would reduce import duties on used vehicles that come in from neighboring
countries.

Speaking at a media parley in Abuja
on Friday, Adeosun, who declined to give details about the identities of those
who forfeited the jewellery, however, said her ministry had now been given the
mandate to manage the recovered assets.

The Economic and Financial Crimes
Commission (EFCC) some time ago disclosed that its operatives seized jewellery
worth billions from the home of a former minister in Abuja.

She said that so far, she has
released over N400 billion for capital projects since May when the 2016 budget
became operative and another N60 billion was going to be released by Friday
evening.

According to her, the present
administration was taking giant steps towards expanding the economy but that
there is always a delay between policy formulation stage and the time that its
effect would be felt in an economy.

For instance, Adeosun disclosed
that work on the international wing of Nnamdi Azikiwe International Airport
which was suspended due to paucity of funds, N4.5 billion counterpart funding
has been paid to the contractors.

Speaking on revenue and
expenditure, the minister explained that of the N1.5 trillion projected
independent revenue for the Federal Government in 2016, about N200 billion has
been collected but gave the assurance that innovative methods are being
deployed to meet the target before the end of the year.

This, she said, would include
reduction in import tariff on used vehicles (Tokunbo) being imported into neighboring
countries but smuggled into Nigeria.

Government discovered that import
duty in one of those countries was just 10 percent while it is 30 percent in
Nigeria and this has encouraged smuggling with the attendant loss of revenue.

Presently, Adeosun said a committee
was working to review this high tariff as a way of discouraging smuggling and
consequently improving revenue.