State, LG Worker’s Salaries, ‘’we are planning to change mode of payments-Fayose 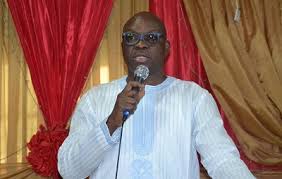 Governor Ayodele Fayose spoke in
Ado Ekiti, the state capital, during a meeting with directors of finance and
accounts, directors of administration, chief internal auditors and others from
across ministries, departments and agencies in the state.

Fayose, in a statement by his Chief
Press Secretary, Mr. Idowu Adelusi, in Ado Ekiti on Sunday, also warned public
servants against signing documents without thoroughly going through them.

According to him, any negative
fallout from a signed document would be blamed on any officer that signed it.

The meeting was convened to find
solutions to the problems associated with generating wholesome nominal and pay
rolls by MDAs in the state, the statement added.

The governor frowned on a situation
where people, who had left the service or died, still had their names on the
nominal roll.

“Why should we be spending our
scarce resources wastefully? We are no longer going to tolerate the issue of
buck passing, where someone will claim he is not the one that generates the
nominal roll and so does not properly go through it before preparing the pay
roll.

“Henceforth, the nominal and pay
rolls must be properly scrutinized by the internal auditors before being
signed. The system has adequate checks and balances already in place and if not
for collusion by concerned public servants, no sharp practices could take
place.

“It is advisable that every officer
properly goes through any document before signing such, as the person who
endorses any document is going to be held responsible in case of any issue,” he
said.

The governor, after listening to
complaints by internal auditors that they did not have computers to be able to
verify the soft copies of pay rolls sent to them from the Accountant-General
Office, directed that all the officers should by next week be sent on computer
training and afterwards be provided with personal computers.