Troops in N’East may be evacuated and Returned to Barrack in 2017, says Buratai 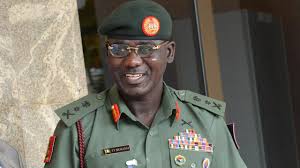 The Chief of Army Staff, Lt. Gen. Tukur Buratai, on Monday
hinted that troops fighting the Boko Haram insurgents in the North-East would
be returned to the barracks in 2017, when the fight would have been over.

Although twin blasts, suspected to have been coordinated by
the Boko Haram fighters, killed 56 persons and injured 77 in a market in
Madagali, Adamawa State on Friday, the army chief said the military was sure of
success over the insurgents.

Also, on Sunday, another suicide attack on Monday Market,
Maiduguri, Borno State, claimed three lives and injured 17 persons, but
Buratai, who visited troops in the Damboa Local Government Area of the state,
said the army would continue aggressive actions against the insurgents.

The army chief, who visited the 81 battalion on Monday, added
that success over the Boko Haram remnants in the area would also facilitate the
return of the Internally Displaced Persons to their homes.

“This battalion has done well. It fought along with the
Cameroonian troops in this battle which means it is better placed to deal with
these criminals. We must continue with the aggressive actions, patrol and
ambush.

“We must move into all the hideouts of these criminals and
fish them out. Other troops in the Sambisa Forest are dealing with them as
well.”

Buratai said the army would do more to enhance the welfare of
troops, adding that there would be a rotation of soldiers every six months of
deployment.

The COAS also visited
Alpha Company of 25 Brigade in Damboa to assess the new headquarters of the
brigade.