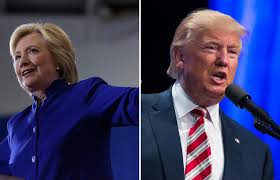 Donald Trump took the early
electoral-vote lead over Hillary Clinton Tuesday night, as the candidates each
claimed big – albeit expected – state victories, but were locked in a tight
race for numerous key battlegrounds.

It was too early or close to call a
range of vital swing states, including Pennsylvania, Florida, Ohio, New
Hampshire, Virginia and North Carolina.

While the outcome of those races is
unclear, Fox News can project that Trump will win in Texas, Arkansas, Kansas,
North Dakota, South Dakota and Wyoming. In Nebraska, one of just two states
that does not use a winner-take-all system of awarding delegates, Fox News can
project that Trump will win four electoral votes. It is too early to say who
will win the final vote in that state. Trump earlier claimed projected
victories in South Carolina, West Virginia, Kentucky and Indiana, where running
mate Mike Pence is governor, as well as Alabama, Missouri, Mississippi,
Oklahoma and Tennessee.

Clinton, meanwhile, is projected to
win delegate-rich New York. Clinton was projected to easily win her home state
of Illinois, and is also projected to win Connecticut, New Jersey,
Massachusetts, Maryland, Rhode Island, Delaware and the District of Columbia.
She already had won Vermont.

Meanwhile, Clinton is ahead in New
Mexico, though it’s unclear whether she will prevail there.

It’s also too early to project
winners in perhaps the two most important battleground states of the hour –
Arizona and Colorado.

And while Clinton has a lead in
North Carolina, it’s too early to declare a winner in the key swing state. In
Virginia, where Clinton’s running mate Tim Kaine serves as the state’s junior
senator, she has a lead over Trump, though it is too early to project a winner.
It’s also too early to call Georgia.

The incoming returns follow a
frenzied day of voting across America marked by long lines and last-minute
appeals for support from both campaigns.

While the race has tightened in
recent days, the Democratic nominee still seemed to enter Election Day with the
edge on the electoral map in her quest to become the first woman elected U.S.
president. But Trump voiced confidence Tuesday about his chances in key
battlegrounds.

“We’re going to win a lot of
states,” the Republican nominee told Fox News, as he aims for an upset victory
to cap his improbable campaign which came from behind to vanquish 16
competitors in the rowdy Republican primaries.

The general election race between
Clinton and Trump has been no less grueling.

The presidential debates were
marked by outbursts, interruptions and name-calling, as the candidates dealt
before, during and after with a slew of campaign twists that kept the race in
flux all the way to Election Day.

The most recent bombshell was FBI
Director James Comey’s announcement 11 days before the election that the bureau
was revisiting the investigation into Clinton’s personal email server use while
secretary of state, after discovering new messages on the laptop of disgraced
ex-Rep. Anthony Weiner, the estranged husband of a top Clinton aide. He closed
the case again on Sunday, but Trump already was using the brief probe to revive
the email controversy in the final days. The WikiLeaks release of emails hacked
from Campaign Chairman John Podesta’s account also has become a constant
distraction for the Democrat’s campaign, as the messages revealed infighting,
internal ethical concerns about the Clinton family’s foundation and even
evidence that the now-head of the Democratic National Committee leaked town
hall questions to Clinton during the primaries.

Meanwhile, Trump dealt with – and
denied – numerous allegations of sexual harassment and assault that came out in
October, following leaked footage from over a decade ago showing Trump making
crude comments about women.

The candidates swept all that aside
in the closing hours of the race, as Clinton cast herself as a unifying force
after a divisive election and Trump cast his bid as the vehicle to bring jobs
and security back to America.

Clinton, in North Carolina, said,
“We have to bridge the divides in this country.”

No matter who wins, the 45th
president will take office to an anti-establishment mood in the electorate and
deep voter dissatisfaction with the direction of the country. Concerns about
health care, the economy, terrorism and illegal immigration dominated the race
and are unlikely to be settled by Tuesday’s vote.

Voters are also deciding Tuesday
whether Republicans should keep control of both the Senate and House of
Representatives. That decision will have a big impact on the success of the
next president’s agenda.