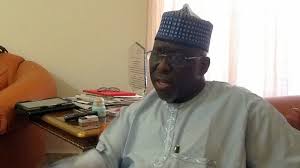 Wada, who called on his supporters
to see the judgment “as the will of the landlord of the universe, who sees the
hidden things of the dark”, promised to be a strong opposition in the state.

He said the judgment was against
all lovers of democracy worldwide adding that he was proud “to have represented
the moral imperative in a polity struggling to retrieve its conscience from the
depravity of men who have no honor.”

His position was contained in a
statement by his Chief Communications Manager, Phrank Shaibu, which was made
available to journalists in Abuja.

The statement read in part, “The
decision of the Apex Court, brings to an end a legal battle we initiated not
because we just wanted a second term in office; but to serve as a historic
denunciation and a befitting dirge for electoral fraud.

“Though we expected the noble
dispensers of justice at the Apex Court to have delivered a judgment that would
be untainted by lucre and uncowed by the threat of immoral power;
unfortunately, it was not to be. But we are proud to have represented the moral
imperative in a polity struggling to retrieve its conscience from the depravity
of men who have no honour.

“We are proud to have stood beside
the good people of Kogi State in their struggle to assert the legitimacy and
dignity of their vote. We give all the glory to the Almighty for giving us the
strength and the support of the teeming mass of our people to maintain the
legal battle.

“Those who do not understand the ways of God
and the efficacy of His powers may mock or deride you, but keep your head high
for the common good of the greater Kogi of our dream. The Supreme Court
judgment may not have come the way we desired but that’s the more reason we
should demonstrate to the world how much we love our dear state by maintaining
peace and order.”

The former governor also expressed
his resolve to support Bello to take the state to greater heights.

He said “We have resolved to do our
best in whatever way possible to offer support to Governor Yahaya Bello for the
uplift of Kogi State.”d, “I have listened to the comments raised and this is
why I said I am glad about this forum. It is only through such forum that we
are able to know about what is happening in the state formations of SARS so we
can report adequately to the IG who will take necessary action.”